Before the Eurozone currency was formed, Germany was nicknamed the “sick man of Europe.” It had persistently high unemployment as it was a manufacturing-dominated economy with a continuously strong Deutsche Mark. Not a great scenario when the wages of the Germany employees were already the highest in the world. 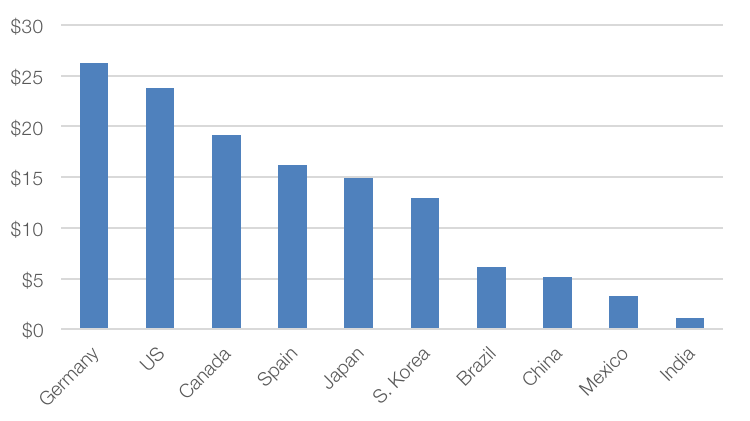 Since then, Germany has been the model example of “reform,” and economic progress. Yet this progress has almost entirely been achieved at the expense of peripheral countries that were locked into a common currency with its high-cost, low inflation neighbor.

Italian unemployment has been persistently high since the formation of the Eurozone. Inflation in Italy versus northern Europe, particularly Germany, had always run substantially higher, particularly in wages. This loss of competitiveness relative to workers in the north was offset by routine devaluations of the lira.

Despite the enforcement of Germanic monetary policy with the introduction of the euro, this wage inflation persisted until the Grexit crisis started to impose deflation on peripheral indebted countries. Now that years of wage deflation in Italy have been contrasted to accelerating wage inflation in Germany, Italy has regained a substantial amount of labor competitiveness lost to Germany after the low-inflation country tethered the inflaters to its own low-inflation currency and monetary policy. The correlation between Italian competitiveness and labor market relative to Germany has a 96% correlation on a one year lag. Correlations this high in economics are rare, or anywhere for that matter, as if this data had come from a drug trial, the FDA would actually approve it.

Exhibit 2: Differences in Labor Competitiveness and Utilization Between Italy and Germany 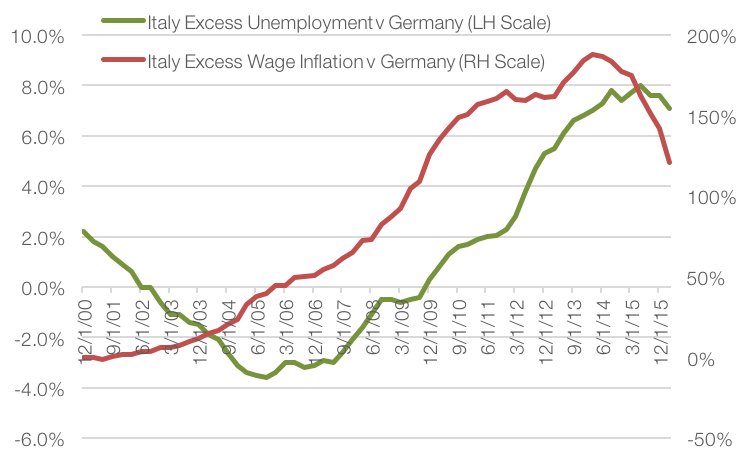 Because German wages have been significantly inflating, particularly relative to the deflation in Italian wages, this 96% correlation suggests that Italian unemployment will be coming down by a relative 2.8% over the next twelve months (from 11.4% to 8.6%). While this is theoretical, and the actual result will be different from the model (as the real world always is), the would leave substantial room for improvement in Italy’s economy.

Even with the uncertainty being created by Renzi’s December referendum on a constitutional reform, just as the model would suggest, unemployment has continued falling, defying expectations of sclerosis. Consumer confidence in Italy also tells exactly the same story, with the index hitting a record high in early 2016 and maintaining very high levels even into the riskier electoral season.

Italian companies and the Italian stock market are also significantly cheaper than their German peers, as the country is viewed by markets almost as a third world, or emerging market, country. This is despite that in our experience, Italian corporate governance is decidedly shareholder-value-oriented, whereas German corporate governance prioritizes labor above capital. Furthermore, northern Italy is just as competitive, if not more so, than Western Germany.

Exhibit 3: GDP per Capita by Region in the EU 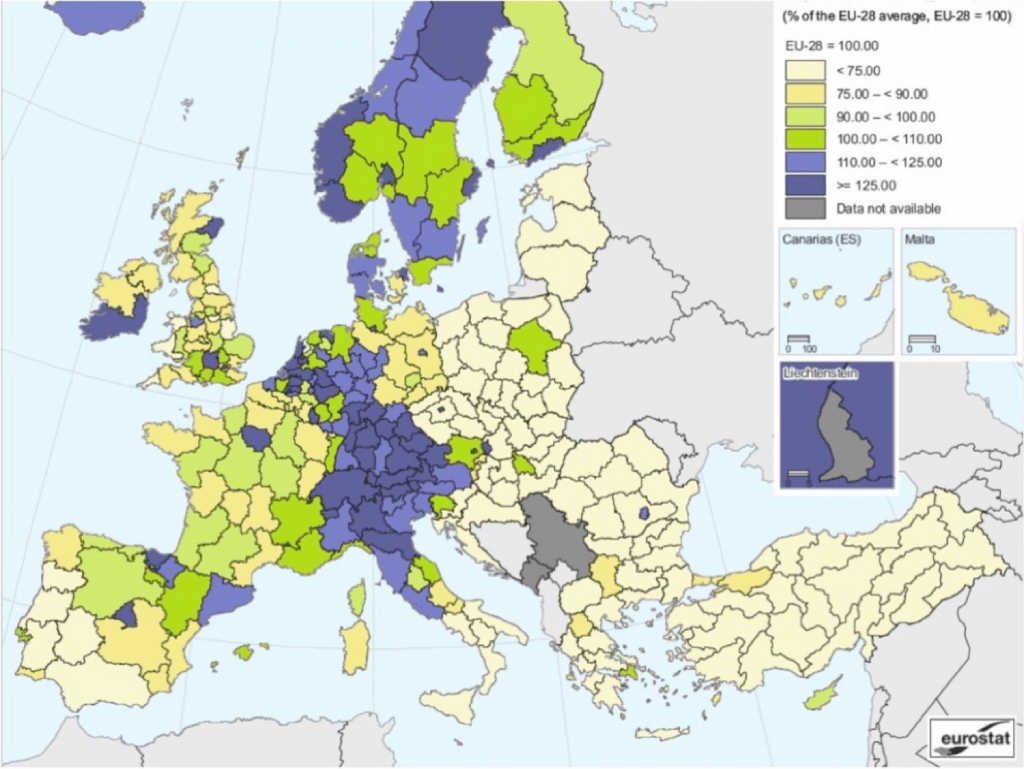 Overshadowed by the Italian referendum in December and misperceptions about the competitiveness of Italian businesses, we think Italy is ripe with opportunities. Additionally, as we discussed in our recent quarterly letter, we believe the market expectations on the referendum are actually inverse to the market expectations of the probability of Brexit happening back in early June. While the polls were saying the odds were a coin flip, the market was pricing-in an 85-90% chance of a Bremain. With Italian polls equally indicating coin-flip odds on the referendum, which is a significantly less consequential ballot measure than the Brexit poll, the market has priced-in the probability of a “no to reform,” vote decidedly higher than 50%. Yet let’s say the country votes against reform and Prime Minister Renzi resigns. The President is poised to re-appoint him as a caretaker Prime Minister and almost nothing would change in Italy. If anything, the market would jump to a conclusion that Italy was on a road to exiting the Eurozone currency, again, we would disagree with this conclusion.

But let’s say Italy is on the path to leaving the Eurozone. Such a departure would surely collapse the entire common currency experiment and also embolden France to exit. Who would lose the most and who would benefit the most? The Brexit vote provides a decent case study on this. Exporting, international companies based in a country with a significantly depreciated currency performed very well. It was countries outside of this depreciating currency which performed most poorly.

Given the Deutsche mark would rapidly appreciate and make its labor force not only the most expensive in the world, but also trapped in a deflationary, currency-appreciating country, the German mittelstand would once again restore Germany to being the “sick man of Europe.” Italy and peripheral countries would rapidly gain significant competitiveness against northern Europe, and international export-driven companies would benefit the most.

Isn’t it ironic that they’re also the cheapest segment of European equities?

We think that in either scenario: a stronger and unified Europe, or a fraying and broken Europe, Italian equities are poised to significantly outperform the more highly-valued Germany peers. We’re already net short Germany and net long Italy, and are working hard to find more short opportunities in Germany. If you know of any good ones (or even Italian shorts for that matter), we look forward to hearing from you and we’ll share our thoughts on what we’re working on.