Good thing we have our seat-belts on. Sergio Marchionne has his management team in North America firing on all cylinders. Just as the new Alfa Romeo Giulia accelerates faster than any car in its class (it goes from 0 to 60 mph  in 3 seconds), the pace of FCA’s margin expansion similarly beats all peers.

Last quarter, Marchionne committed to getting to a 7% EBIT margin in North America by the end of this year, and he quickly surpassed this ahead of schedule, with this quarter clocking in at a 7.7% margin. To be frank, this is still a 2-3% gap relative to Ford and GM, but Fiat-Chrysler has just committed to closing the gap. This is quite a bit better than what the company told investors last year, when it said it was targetting long-term margins for North America of 6-7%. Clearly those targets, like many of its forecasts, have proved to be too conservative.

We’ve updated our EBIT bridge to reflect this solid execution, as well as a one-quarter delay in the launch of the Maserati SUV. In these estimates, we’re assuming the cost cutting in North America and incentives reductions don’t accelerate from the second quarter, which is probably conservative given Marchionne is committing to continued margin expansion in the region. Thus, we’ve only assumed a 6.2% EBIT margin in North America for 2015 and 7.7% in 2016. Should Marchionne actually close the margin gap between FCA and its Detroit rivals, it would add another €1.7B in incremental EBIT on top of our projections, or €7.88 per share of incremental upside to the stock’s fair value, using GM’s current “consensus long,” EBIT multiple. 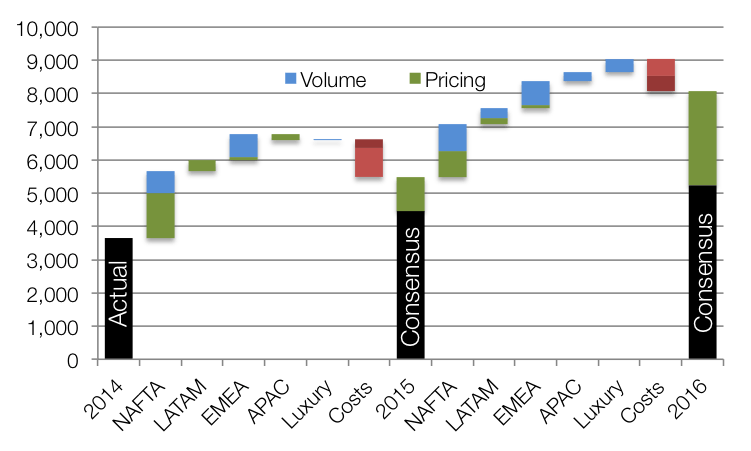 Because we’ve added costs together, exhibit 1 is a bit misleading on Latin America and Asia Pacific: both of these regions are incurring incremental structural costs which are overwhelming price and volume considerations and causing both regions to drag down FCA’s operating income. Clearly North America and Europe are more than compensating for the weakness seen in emerging markets.  Again, the Atlantic regions we discussed last week remain the main drivers of FCA’s significant undervaluation.

We saw a research note earlier in which the analyst claimed FCA was overvalued. Someone needs to remove the hallucinogenics from this analyst’s water source, as FCA remains the cheapest automotive OEM aside from Renault. We’ve updated our valuation exhibit to reflect the better news FCA shared with us today. 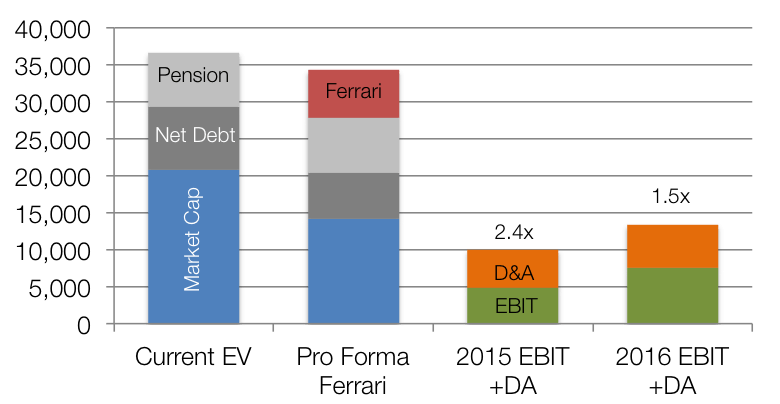 Now that the second quarter report is over, the next major event for FCA shareholders will be the Initial Public Offering of Ferrari. Mergermarket, the leading provider of forward-looking M&A intelligence and data to M&A professionals and corporates, shared our thoughts on Ferrari’s IPO in a recent article which can be accessed by clicking here. Using slightly higher D&A than we had estimated before (this wasn’t publicly reported for over three years), we’ve updated the range of potential outcomes for Ferrari’s valuation. 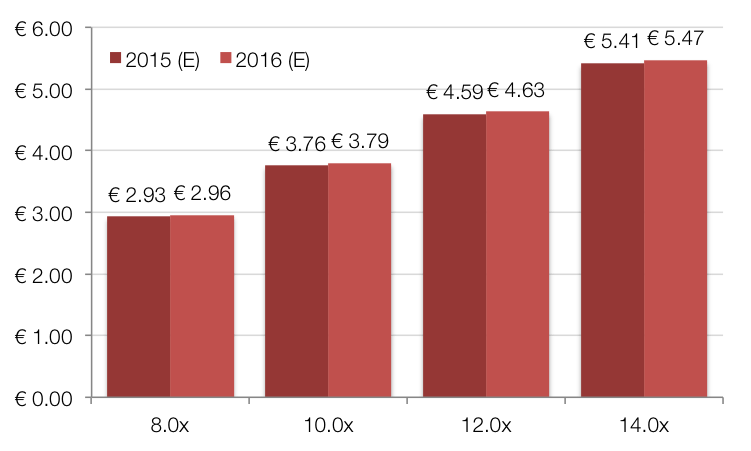 Our best guess is that Ferrari will price modestly above 10x EBITDA, and subsequently trade higher given the very limited availability of shares at first. Again, luxury competitors trade at a high teens, low 20’s multiple of EBITDA.

We’ve heard from a few GM shareholders that have seen Sergio’s recent execution and are now open-minded to a GM-FCA merger. We encourage any GM shareholders that have a relationship with its board or management to give us a jingle if you want us to take you through our math or logic. We suspect as you see shares of FCA double, and then triple, you’ll want the same type of execution that only Italian-Canadian CEOs that drive fast, red, Italian luxury vehicles can give you.

Our full research update from last week can be found here.