A favorite cocktail party question we had a few years ago was, “which business do you think will get amazoned next?” At the time it seemed slightly novel. Now, it seems like the norm. In fact, your GreenWood Researchers recently overheard two grandmothers from Long Island saying there was no need to be entrepreneurial anymore, “because Amazon is just going to destroy your business.” In some respects, this is equivalent to the taxi driver investing in tech stocks in the late 1990s, but in other respects, it’s a sign that retail disruption has gained critical mass.

As the Economist magazine this weekend highlighted in a Special Report, “The total amount of capital, both debt and equity, supporting American retailing (excluding Amazon) now exceeds $2.5trn.” This means that the seismic shifts underway in the retailing landscape will be creating significant opportunities – both on the long and the short side.

Having avoided JC Penney, but missed Coach, we’ve long been attracted like gnats to a flame to the value-drivers of retail. An industry that has always been influenced by long-term trends, with significant operating leverage and large addressable markets, retail should be an industry where investors dedicate some time to, and not just to studying the mighty merits of Amazon.

We think right now is a particularly terrific time to be looking at the retail industry, as the valuations between businesses in secular decline and those with durable competitive advantages are surprisingly narrow. This creates opportunities on both the short and the long side, where contrarians like us can still find fairly differentiated views.

When we took our stake in Whole Foods Market (WFM) in early March, the name was still surprisingly controversial at its trough valuation of under 7x EBITDA. Even after an activist took a stake in the company, short interest has actually grown to a fresh high of 13.0%, and bearish sell-side recommendations still outnumber bullish ones by 1.5x. The consensus view is that Walmart, Kroger and many others are rolling out organic items and the prices in Whole Foods’s baskets are unsustainably high.

The organic rollout across the low-priced and commoditized retailers in the country is mostly in the rearview mirror – that competitive advantage is basically gone. What is not gone is the structurally higher product mix shoppers demand from Whole Foods, as produce is significantly higher-turning and higher-margin than non-perishables, and prepared foods (19% of WFM’s mix) have structurally higher margins than produce and other perishables. Two thirds of WFM’s sales are fresh products, while its peers have two thirds of their sales in the zero-margin category of non-perishables.

Whole Foods has a quality assurance promise that no other grocer can match. Because the cheapest eggs, dairy and meats are at a minimum free-range and cage-free, as consumers continue to care more about the quality of the food they put into their bodies, this “quality assurance,” will keep them coming back to Whole Foods. Locally-sourced and sustainable foods also carry pricing power, as customers are on average willing to pay 14.5% more for locally-sourced products. This doesn’t actually mean Whole Foods’ baskets are priced unsustainably higher than peers. If the shopper compares organic apples to organic apples, the typical basket actually rings up around the same price as competitors like Albertson’s, Kroger and Publix. The key difference is that Whole Foods doesn’t carry factory-farmed meat and dairy products, while its competitors do. That creates a perception of a large pricing gap – a gap the company is working to eliminate by plugging regional vendors into its national distribution network, in exchange for pricing concessions that will get passed along to its customers.

As the company transitions more of its square footage to food halls and bars, the footprint will continue to evolve to a structurally higher margin mix of business. No other retailer aside from small specialty grocers like Eataly is innovating on mix. Yet, with the large looming bankruptcies in the retail sector and vacancies which are set to rise to possibly ⅓ of the current retail network, opening up a physical store has never been cheaper and more contrarian. Consumers will not only continue to want in-person experiences, but will place a premium on differentiated experiences the more their social lives become electronicized. With retail property owners desperate for traffic, Eataly was recently given an entire $20 million store in lease-hold improvements for free as the World Trade Center knew it would drive traffic and create value for the neighboring retail. Nearly all innovation of the past three decades in retailing has happened by lowering distribution costs. Yet, there are certain areas where online sales make little sense.

Because of the inefficient nature of individualized distribution, where much of the variable costs are tied to the volume of the products shipped, the retailers most vulnerable to online disruption are those which have high margins and light-weight products. Books, music and movies were some of the earliest products disrupted, as these retailers had very high margins – leaving plenty of room for amazon to profitably cut prices and still bear a reasonably high cost of variable distribution.

Book vendors also had very low inventory turnover, and a fairly sizable property footprint. This required much higher capital costs to carry this inventory than did other retailers like Walmart, Costco and later Amazon. Using these examples, the simplest rule of thumb to identify businesses most ripe for online disruption would be to map out retailers on the basis of inventory turnover and gross margins, as we’ve done in exhibit 1.

Exhibit 1: The Zone of Disruption 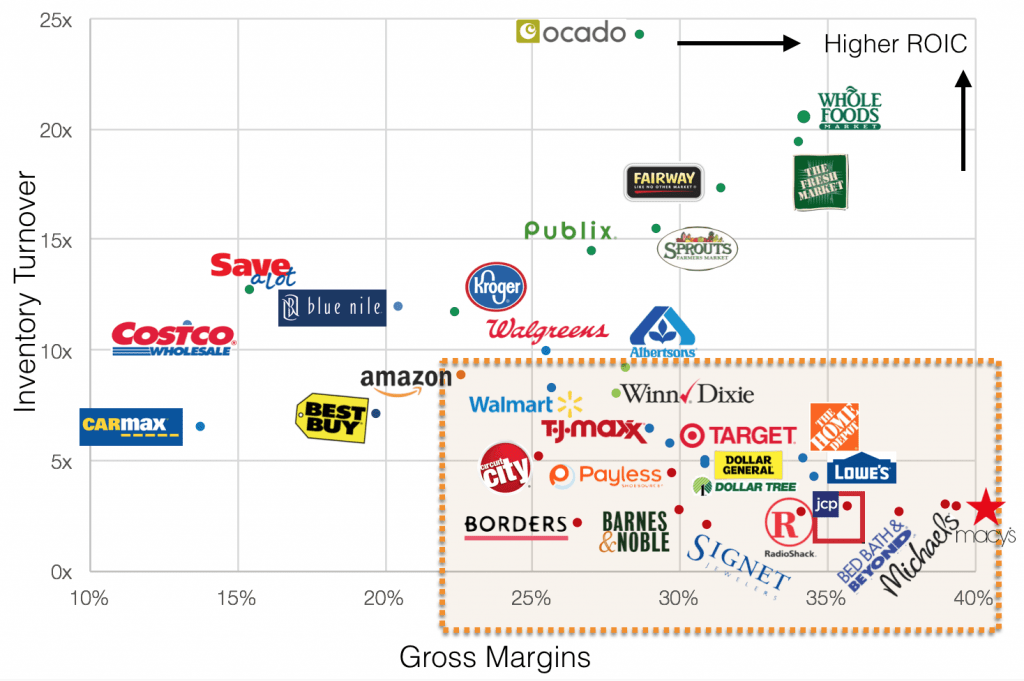 As groceries are particularly heavy items (the average shopping bag weighs 15 pounds and would be north of $20 per bag for Amazon to deliver), have extremely high inventory turnover, and also have a very efficient distribution network, they are one of the least likely industries to be disrupted by e-commerce, as the Economist article also points out. 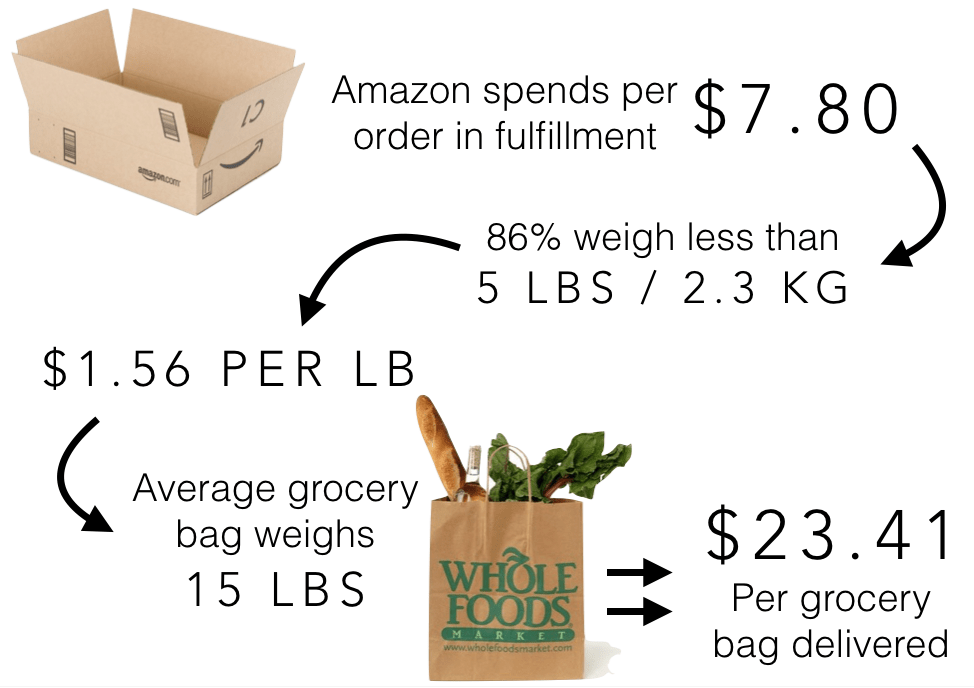 Source: Our Presentation at ValuEspaña 2017

Even with the heavier and costlier economics of individualized distribution, we still believe select grocery demand will eventually go online, particularly for non-perishables that are easily automated. Additionally, the convenience factor alone has been attractive to wealthier consumers, many of which are Whole Foods shoppers. In fact, areas where the company has partnered with Instacart for delivery in as little as one hour, e-commerce penetration at Whole Foods is already hitting the high single-digits.

Of course, inventory turnover and gross margins are just the start of the search for businesses vulnerable to obselesence and e-commerce. The overhead of stores is also a key consideration. The higher the overhead, which aside from occupancy costs is largely tied to the number of employees at a particular store, the easier it will be to take costs out and pass these savings along to consumers. 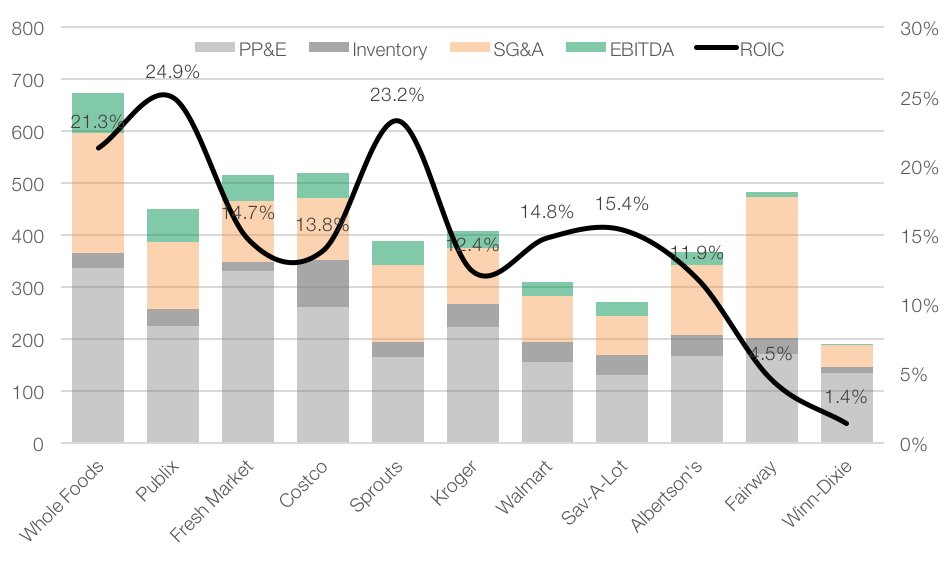 Exhibit 3 is what excites us so much about the Whole Foods opportunity going forward. Because the company’s sales mix is structurally skewed to higher-margin product categories, and its sales per square foot are the highest of any public peer (only Trader Joe’s and Eataly are higher, from our research), as the company automates multiple functions and re-allocates these employees to its new food halls and bars, the company has a substantial opportunity to cut SG&A and, at the same time, continue innovating on the customer experiences and shifting its revenue to a higher-margin mix.

Even after the shares have run up in the last couple of months, the stock remains controversial and we are eager for bears to reiterate their short thesis on the company. Over the next year and a half, the company will be buying back as much as 15% of the company – best to do it under controversial conditions with loud bears around. Yet, while we don’t want them to go away, the bear thesis that that Whole Foods is under attack from a competitive industry is not new, and in fact has largely played out over the past few years. Online threats are not only over-stated but are largely irrelevant.

In one of our favorite books on business, Conscious Capitalism, WFM CEO John Mackey discusses his view that competition forces businesses to continuously innovate and stay a few steps ahead of their peers. In a recent Charlie Rose interview, which we highly recommend, Jeff Bezos also talks about the importance of staying a year or two ahead of the competition.

We think the recent competitive encroachment on Whole Foods’ turf has led to very important cost and product mix innovation at Whole Foods. The company has used the period of deflation well, and now that deflation is ebbing, we think the best days for Whole Foods lie very clearly ahead.